Survivor: Canaima is the sixteenth season of BENLINUS' Survivor series. Sixteen strangers will compete against each other whilst battling the elements. If they can learn to outwit, outplay, and outlast the rest, they will be given the title of sole survivor! The series premiered November 28, 2018, and ended with a live reunion on December 13, 2018.

The winner of the season was Ryan, defeating Lorenzo in a 4-3 vote for the title of Sole Survivor. Christian was named the "Player Of The Season".

The season location of Canaima National Park, Venezuela was decided as being a future location in January, 2016 after the host re-watched the opening scene of the 2000 Disney movie Dinosaur, regarding it as a location that would be suitable to host a season of Survivor.

The season featured sixteen brand new players, divided into two tribes of eight (the classic Survivor format that had not been used since Belize). Both tribes were named after features of Canaima National Park, with Caroní (wearing blue) being named after the Caroní River, and the Kukenán tribe (wearing brown) being named after one of the most famous tepuis. On Day 19, the tribes merged into the Auyán tribe, wearing green.

It was decided the day before the season began that there would be no tribe swaps or major twists in the game other than the hidden immunity idol, as the host wanted a more back to basics feel. The host did consider using a Survivor: Tocantins style exile island twist, but ultimately scrapped the idea.

1 Jabbar was kidnapped by Caroní during the fourth immunity challenge in exchange for forfeiting the challenge. He therefore skipped attending tribal council and could not be voted out. 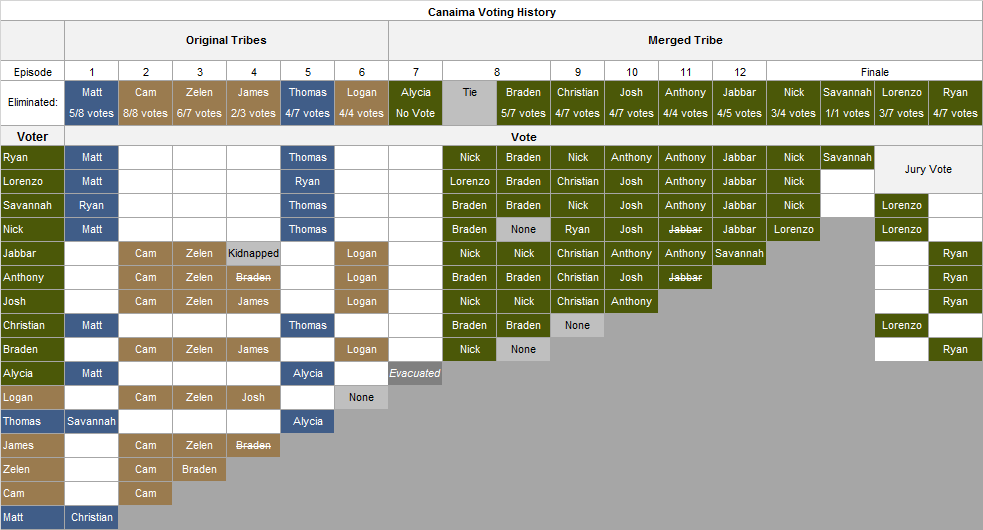 Retrieved from "https://bensurvivorseries.fandom.com/wiki/Survivor:_Canaima?oldid=8002"
Community content is available under CC-BY-SA unless otherwise noted.